Sherman County Courthouse under a rainbow.

Sherman County’s courthouse is an Art Deco triumph. Art Deco features (PDF) on the exterior include glazed tiles of metallic gold, red-brown and blue above the entrance near at the courthouse’s top. The north and south ends of the building are set out slightly from the facade in typical Art Deco fashion. The bricks are buff colored with lighter-colored tiles for contrast. 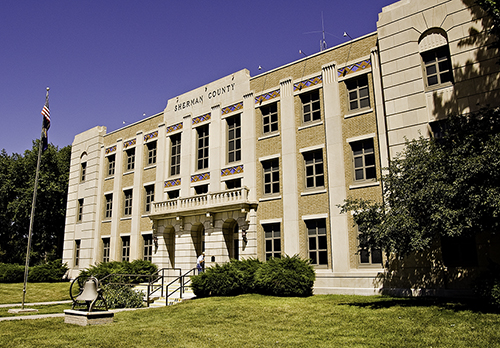 By 1931, Sherman County had outgrown its 44-year-old courthouse and the voters agreed to pay for another one. Some called for a new courthouse to be built on Main Street, but the courthouse had to be built on the same property or the county would forfeit the land. Sherman County Development Company had donated the land for a courthouse, but stipulated that if the courthouse were ever moved the land would revert to the company or its heirs.
The eventual plan called for the new building to be built behind the old 1887 building. In order to make room for new construction, the back half of the building was torn off. County offices either piled into the remaining half or found offices elsewhere.
The architectural firm of Routledge & Hertz of Hutchinson designed an Art Deco structure with colored terra cotta tiles and three-dimensional facade. Wichita’s Blazer-Vollmer was the general contractor. The building cost $115,000, less than the county anticipated. Bids were very competitive. The Great Depression helped with the building’s cost because so many firms were desperate for work. The project also provided many needed jobs to local workers during the severe economic downturn.
Kansas Gov. Harry Woodring spoke at the cornerstone laying May 9, 1931. The names of all county schoolchildren and their teachers were placed into the cornerstone. Sherman County offices moved into the courthouse in August 1931. The dedication was held Oct. 14, 1931.

What to see in the courthouse interior

In September 2000, Dixie Chatfield added stained glass to the windows above the front door in honor of L.A. Chatfield. Mr. Chatfield was elected as County Treasurer for two terms starting in 1917. After World War I, he served as custodian for the first courthouse. United States Coast and Geodetic Survey placed a benchmark in front of the courthouse flagpole. The Central School Bell stands near the entrance.

A remnant of Sherman County’s early days is in the County Commissioners’ Room, which is on the left of the front door entrance. Homesteaders Union Association (HUA) looked after the interests of homesteaders against free-range cattle, claim jumpers and claim contesters. HUA member and carpenter Dick DeWitt built the plaque. The commissioners hung it in the first Sherman County Courthouse ceiling. After the new courthouse was complete, Judge C.I. Sparks hung the plaque in the current courthouse. Ask in the County Clerk’s office across from the front entrance to see the plaque whenever the County Commissioners are not in session.
A smaller replica of They Came to Stay, the statue on the courthouse grounds, is to the right of the front door in a case on the floor. Above it is a 1907 panoramic view of Goodland.

If possible, take the stairs to the second floor to see the three Chatfield windows from inside. They are on the landing between first and second floors. Otherwise, an elevator is available next to the staircase. The courtroom is through the double doors opposite the staircase and elevator.

The courthouse is open Monday-Friday 8 a.m.-5 p.m. Mountain Time except on federal and state holidays. Some offices are closed over the noon hour. Handicapped accessible entrance is at the south door. Best time to visit is in the afternoon when the County Commissioners are least likely to be in session.

Points of interest nearby

The mysterious Kansas Room painting and the rescued stained glass window are in the library across the street. The sculpture More Than Words stands outside the library’s front door. For more Art Deco, visit Goodland High School and United Telephone Building.